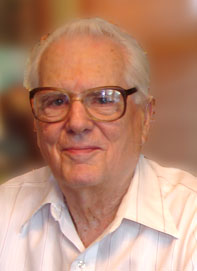 Ross Macdonald has published over 250 papers in the fields of physics, chemistry, applied mathematics, and electrical engineering, and he holds ten patents.

He is also the author of two freely available software programs.  GENLS is a generalized nonlinear least squares fitting program appropriate when both the dependent and independent variables contain significant errors.

LEVM/LEVMW is an extensive and powerful complex nonlinear least squares program for fitting, simulation, and inversion of frequency and time domain data sets.  It has been optimized for analyzing electrochemical, dielectric, or high-resistivity conductive-system data.  For users of LEVMW on Vista or Windows 7 a fix to make the HELP file work properly may be downloaded from:http://support.microsoft.com/kb/917607/en-us

You can access the group by going to: http://groups.google.com/group/impedance-spectroscopy.

A short summary describing a widely applicable and superior data fiitting approach, the CK1 model, using LEVM/LEVMW, is available for downloading. **See also new material on the important Poisson-Nernst-Planck (PNP) response model and its anomalous diffusion versions, PNPA, in the recent JRM publications #’s 252-256, and on pp. 5-15 through 5-19 of the LEVM manual.

Virtually all of JRM’s scientific papers, except abstract-only ones, are now available for reading/downloading.  See the serial listing.

See the new detailed Guide to JRM’s electrochemically oriented publications; it relates areas and subjects to specific papers, as well as identifying popular ones.

A great deal of information about electrochemistry may be found on a comprehensive  website for   Electrochemical Science and Technology Information Resource (ESTIR):

Dr. Macdonald worked at Texas Instruments from 1953-1974, where he built up a very productive Physics Research Laboratory, then was primarily responsible for the growth and excellence of TI’s Central Research Laboratories (CRL) over a 10-year period. As corporate Vice President for Research, Development, and Engineering, he played an important role in the creation, management, and evaluation of technical projects in all divisions of Texas Instruments. ** See a listing of the major contributions of CRL from 1955 to 1975.

Subsequently at the University of North Carolina, Chapel Hill, Dr. Macdonald became a member of the Department of Physics and Astronomy. He retired from teaching in 1989 but continues research in condensed matter physics, in electrochemistry areas, and in data analysis methods.